“All the ancestors in that building were holding up the wall!”

That was the consensus of watchers as the historic Daryl Building complex burst into flames and after 5 hours collapsed into a heap along the road. Firefighters from three communities and police officers from all over the county fought to save the Genealogy Library Center building, the new community church the insurance office and cleaners, and small shops along main street in Tremonton, Utah.

Tuesday afternoon, 13 July 2021, it was almost 100 degrees at 4:00 pm when the four-alarm  fire broke out. With billows of black acrid smoke that eventually turned into thick, suffocating white  smoke enveloped the brown brick building, shop by shop and apartment by apartment. The entire water supply of the Northern Utah town was depleted as 4- and 6-inch hoses focused on controlling the flames and keeping them away from attached and nearby structures.

Separating the Daryl Building from the Genealogy Library Center was a firewall–brown brick and cinder block wall–that ran more than 50 feet between the buildings. A miraculous firewall of ancient construction, which neither the flames nor the force of water at 3,000 gallons- per- minute could penetrate. Blackened wooden trusses held the roof in place and the flame-retardant roofing, which required the claws of a wrecking crew to  defeat the flames. Five hours it took!

Winds that normally blow each evening in Tremonton Utah did not blow on Tuesday–they waited until Thursday to come.

The Genealogy Library Center got no water in the basement. The firewall–which was actually disintegrated by the heat of the fire held. The roof did not collapse from the weight of the water. The firemen laid tarps over the file cabinets and bookshelves before piercing the roof with holes to check for bunting wood below the roof, so the contents were protected. We do have light fixtures with water in them and water damage to ceilings and floors.

The main roof held against the water, although there is considerable damage to the ceilings. And the acrid small of smoke throughout the whole building. It will take some days to assess the full extent of damage to the Center, but angels were on guard that day. Copy machines are made mostly of plastic now days. Wooden desks and bookshelves blister and bleed in intense heat.

Current working files for genealogy research cases I am working on were not at my office in the Center, they are here at my home. Some delays in reporting will happen, I am sure. Copies of documents and maps, always part of my reports have to be copied and readied for shipment at my local copy shops because my equipment is now unavailable.

Give me a couple of weeks until I get the documentation for the Insurance companies ready. Then I will be able to ship my reports. Your favorite genealogist, Arlene Eakle http://arleneeakle.com

PS And please keep praying for the well-being of the Genealogy Library Center in Tremonton UT and its precious contents–all of them. The angels are at work and they need your prayers. So do I. 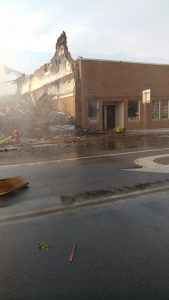