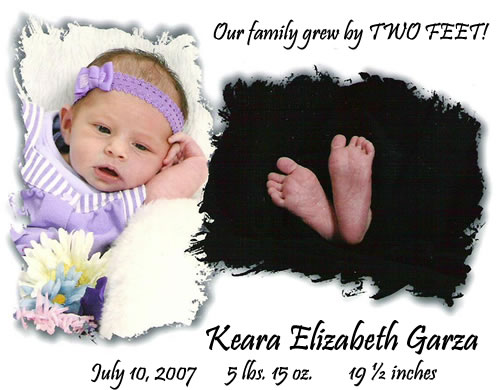 Keara is the daughter of my granddaughter Kara Brinkerhoff and her husband Courtney Garza. Note the given names of these two female descendants. Much attention is given to surname patterns, too often the given name patterns are overlooked. So I decided to devote this First Anniversary Genealogy News Sheet to given name patterns. English Naming Patterns:
Using naming patterns as genealogical evidence is becoming common among modern genealogists. The references selected below will help you to follow names in an educated and thoughtful way. The 21st century explosion in DNA projects, tied each time to surname by direct descent, brings a new and perhaps unknown dimension into our work Whether this dimension will affect evidence in naming patterns remains to be seen–its just too early to tell. Still a cautionary note is needed–back up all evidence with actual documents each and every time so evidence from one area can strengthen or challenge the evidence from another.

Steel, D.J. “The Descent of Christian Names, “ Genealogists’ Magazine 14 (1962): 34-43. This important article sparked a number of responses and local examples from readers of the magazine. You will find it useful to follow the discussions in subsequent issues. Steel describes the shift from non-kinsfolk naming patterns to sons being named for fathers and daughters for mothers. The role of the godparents is described. Until 1865, parents did not usually serve as godparents in the Anglican Church and the children tended to be named for the godparent of the same sex. This Anglican naming practice in England and Wales affects the pedigree/name/relationship formula found in other cultures. Watch carefully.

Waters, John J. “Naming and Kinship in New England: Guilford Patterns and Usage, 1693-1759.” New England Historical and Genealogical Register 138 (1984): 161-81. Very significant study from which these facts emerge:
1. John, Thomas, William, and Richard are the given names of some 60% of English males before 1538. Mary, Anne, Elizabeth, Sarah are the most common female given names.
2. One given name is common in most families until the 1800’s, except among the nobility and gentry. This differs considerably from the naming patterns of non-English backgrounds.
3. 82% of fathers named at least one son after themselves in New England. Most often, the eldest son was named for the father. 77% of Virginians named a son after themselves before 1750.
4. 72% of mothers named a daughter after themselves in New England; 69% of mothers named a daughter after themselves in Virginia. It is less clear, if the namesake is the eldest daughter.
5. Name replacement when a child dies is common–the next same sex child is given the same name 42% of the time.
6. Naming patterns are carefully selected by families to identify their own world of kinfolks.
7. The name pool for both boys and girls was expanded by using character and personality traits. Examples: Patience, Mindwell, Experience, Silence, Hope, Charity.
See also Gloria L. Main, “Naming Children in Early New England,” Journal of Interdisciplinary History 27 (Summer 1996):1-28 and Richard W. Price, Child-Naming Patterns in Three English Villages, 1558-1740: Whickham, Durham; Bottsford, Leicester; and Hartland, Devon. MA Thesis, University of Utah, 1987. Puritans held parents responsible for the spiritual nurture of their children and did not use godparents.

Neill, Michael John. “Multiple Johns: The Story Behind Two Full Brothers Who Shared a First But Not a Last Name,” Heritage Quest #40, p.7. This is an important example of a common English pattern–more than one living child in a family can carry the same given name. Do not assume that because second child is named John, that the first one died.

This entry was posted in Blog. Bookmark the permalink.

1 Response to My new great-grandchild, Keara